The Transcendent Chaos of ‘Everything Everywhere All at Once’ 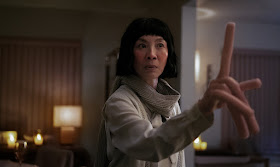 Be forewarned: There is no way to adequately craft a proper review of Everything Everywhere All at Once without an inordinate number of adjectives and other qualifiers. In fact, it would likely be easier to create an extensive list of adjectives—with adverbial modifiers to drive the point home—to critique this extraordinary achievement in American filmmaking. 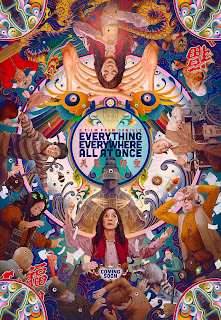 Everything Everywhere All at Once is the bombastic brainchild of the directing duo collectively known as Daniels—Dan Kwan and Daniel Scheinert. The filmmakers previously helmed the 2016 surrealist comedy-drama Swiss Army Man, which saw Daniel Radcliffe playing a corpse with propulsive flatulence and an erection that doubles as a compass. Daniels bring that unique brand of off-kilter kookiness to their latest effort and then turn the sensory overload dial way up past the point of no return. Daniels effectively throw everything and the kitchen sink at the wall and—remarkably and improbably—everything sticks, everywhere, and (yes) all at once.

The incredible Michelle Yeoh toplines as Evelyn Wang, a Chinese-American immigrant and laundromat owner who, while being audited by the IRS, discovers that she must connect with different versions of herself from parallel universes in order to prevent the destruction of them all by an evil entity known as Jobu Tupaki. That’s a dramatic oversimplification of the plot, which also has Evelyn grappling with her daughter’s sexual orientation, learning of her husband’s petition for divorce, and stressing over the arrival of her judgmental father (the legendary James Hong) from China. Looming over all of it is frumpy, humorless IRS inspector Deirdre Beaubeirdra (Jamie Lee Curtis), who warns of foreclosure and repossession due to Evelyn’s woeful mismanagement of the business’ taxes. 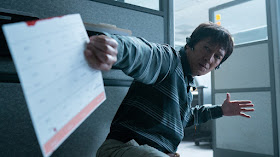 Through a variant version of her husband, Waymond (The Goonies Ke Huy Quan all grown up), Evelyn learns that every choice made creates a new universe; these innumerable parallel universes make up the multiverse. In order for Evelyn to defeat Jobu Tupaki—a version of her daughter, Joy (The Marvelous Mrs. Maisel’s Stephanie Hsu) who’s capable of experiencing all universes at once and manipulating matter at will—she must repeatedly “verse-jump” and connect with the different versions of herself to access the skillsets and memories of her parallel universe counterparts. But there is inherent danger in verse-jumping with such abandon; Evelyn risks splintering her mind, which is what drove a once benign version of her daughter to become the self-hating Jobu.

In her many verse jumps, Evelyn sees how her life would have turned out having made a single different choice. In one, she’s a glamorous martial arts movie star who encounters a sophisticated version of a Waymond she left and never married—one who now rejects her. In another, she’s a lesbian married to Dierdre, in a bizarre world where humans have hot dogs for fingers and play the piano with their toes. In yet another, she and Joy are merely two rocks with googly eyes living on the edge of a cliff. Daniels excel at creating madcap, boundary-pushing dreamscapes within these multiple realities existing at once within the known realm of time and space.

Within their evocative and cacophonous labyrinth of storytelling, the directors employ an anything-goes audacity—a swirling cyclone of fertile ideas and heady concepts—and straddle the worlds of science fiction, comedy, drama, action, and martial arts. The nearly two-and-a-half-hour film moves at a frenetic pace, with nonstop martial-arts action and in-your-face slapstick that allow for no bathroom breaks. (Word to the wise: Only buy the small soda and sip judiciously). Despite the complexity of their convoluted plot, Daniels admirably keep things surprisingly coherent—even the technobabble makes sense. 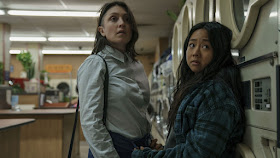 Yet, despite its massive interdimensional scope, Everything Everywhere All at Once is surprisingly intimate in scale. Even as the film slingshots between realities, somewhere between super-powered pinky fingers and weaponized butt-plugs, its absurdity is matched only by its heart. While you’re strapped in and relinquishing yourself to the cathartic rush-release of Daniels’ delightfully gonzo rollercoaster ride of psychedelic visuals and bold tonal shifts, you don’t expect the film’s emotional core to sucker punch you so hard by the end. With its larger, overarching message about kindness being the strongest weapon, it’s a story of human connection explored here in the conflict and reconciliation between an Asian mother and daughter who learn to cherish each other again. 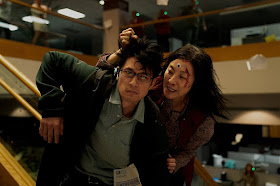 Anchoring that emotional core is Yeoh’s Herculean performance. The film reads like a love letter from Daniels to the 59-year-old actress, who’s given what’s easily the best role of her career. Yeoh adeptly juggles the myriad nuances of Evelyn’s multiverse counterparts with aplomb, never losing track of who she’s supposed to be at any given moment. That she’s able to play so many versions of, essentially, the same character is no small creative feat. She effortlessly switches from comedic to dramatic, from martial arts maestro to overwrought mother, without missing a single beat anywhere in the film. Yeoh’s Evelyn shows us that even when you feel like you are the worst possible version of yourself, there is hope.

Likewise, the film’s supporting cast is a treat. Arguably, Quan does as much heavy lifting as Yeoh, especially in being tasked with having to explain the more technical aspects of Daniels’ plot. Hsu is a pure joy (pun intended) as both disaffected twenty-something daughter and as the colorful, villainous embodiment of all that disaffection. (Fun fact: Hsu got the role after Awkwafina dropped out due to scheduling conflicts.) Hong, a legend in his own right, lends gravitas to his role as Evelyn’s father and it’s a hoot to see him deployed in the multiverse. Tallie Medel as Becky, Joy's girlfriend, also makes the most of what could have been a pedestrian role. Curtis, who’s become so comfortable in her own skin as an actor as she’s matured, is a real scene-stealer here. In the hands of a lesser actor, her crotchety Dierdre could have been played as a one-note comic relief character, but Curtis imbues her with so many subtle humanities, that she elevates Dierdre beyond the periphery. There’s a scene between Evelyn and Dierdre outside the laundromat toward the end of the film that is utterly pitch-perfect and shows why these two women are Hollywood royalty. 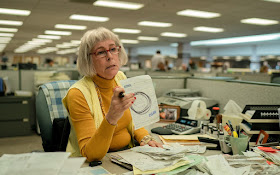 My only beef with Everything Everywhere All at Once has nothing to do with the film itself and more to do with its distributor, A24. Arguably one of the most ambitious and prestigious film outfits out there today, I’m baffled why they chose to release this virtuoso cinematic triumph so early in the year. My fear is that the film will be overlooked come awards season later this year—and that will be nothing short of criminal. The film, its directors, its screenplay, its score by Son Lux, Larkin Seiple’s cinematography, its countless technical achievements, and at least three of its actors—Yeoh and Quan in lead acting categories, Curtis in supporting—should all receive nominations from multiple awards bodies. I hope the members of these various awards institutions will remember this masterpiece film a few months from now amid the noise of the year-end slate of “prestige” films that take over the narrative leading up to nominations.

Somewhere between death and taxes are beautiful moments—and these brief snippets of time are what make life worth living. This is the essence of Everything Everywhere All at Once and Daniels—aided immeasurably by Yeoh and their ensemble—employ an unmatched artistic aptitude in bringing their vision to whimsical, technicolor life. It’s a masterclass in filmmaking that will enthrall you with its exquisitely choreographed martial arts sequences before bringing tears to your eyes with the weight of its profound questions and truths about life. Unlike anything you’ve seen before, Everything Everywhere All at Once is destined to be a classic, an amalgamation of genre anarchy that defies classification, subverts expectations, and explores existential matters with empathy and insight. This marvelously unhinged slice of cinematic maximalism is nothing short of a work of art—and not to be missed.