A Tribute in Pen and Ink 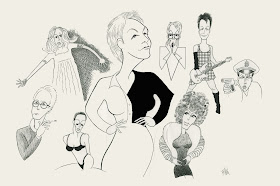 When my Dad passed away this past December, I wanted to do something special with a portion of the estate proceeds—something that would have significant personal meaning. I’ve mentioned before how my Dad would take me to the movies every Saturday as part of our weekend “buddy days” when I was a kid. They were usually Irwin Allen disaster flicks or movies with a lot of car chases, but then a little film called Jaws was released. I was eight years old and can still feel the knot in my stomach the first time I heard the first notes of the film’s now-legendary theme music. I think I only made up to the point when poor skinny-dipping Chrissie gets slammed into the buoy before I pleaded with my Dad to leave. It would take three subsequent tries before I could make it through the entire film, each time making it a little further into the film before my ever-patient father heard the desperation of the “Please, Daddy…can we leave now?” in my voice. But 1978 was a game changer for ten-year-old me—on the cusp of adolescence—with the release of John Carpenter’s Halloween. If Jaws hooked me, Halloween reeled me in and cemented what would become a lifelong adoration of both slasher films and a certain actress named Jamie Lee Curtis. It therefore seemed fitting to incorporate the themes of movies and JLC into my tribute and that something special to have created in memory of my wonderful, loving father. 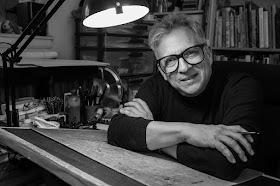 I’ve long been a fan of illustrator and famed caricaturist Ken Fallin, who first came to prominence in 1983 doing the posters and advertising for the popular satirical revue Forbidden Broadway in the style of the famous pen and ink drawings of the legendary Al Hirschfeld—a concept in homage to the great theatrical caricaturist. He’s since gone on to illustrate roughly 500 notable people for the Wall Street Journal and has contributed countless other illustrations to The Boston Herald, The New Yorker Magazine, The Hollywood Reporter, The Los Angeles Times, The Washington Post, The Chicago Tribune, and Playbill (among others). Private collectors of Ken’s work include Angela Lansbury, Warren Buffett, Barbra Streisand, Sarah Jessica Parker, Darren Criss, Bernadette Peters, Sarah Paulson, Bradley Cooper, and Sir Patrick Stewart. Fallin did a lovely caricature of the cast of 2014’s Broadway production of Harvey Fierstein’s Casa Valentina, which I saw with my friend James and loved. I reached out to Ken and purchased a print of the drawing, which hangs today in one of our guest rooms. 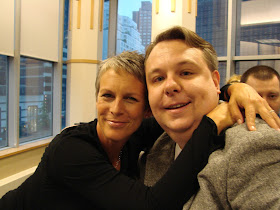 So, the idea came to me: To commission an original caricature of Jamie Lee Curtis, in character, from some of her most notable film roles—in honor of my Dad and the love of movies that he endowed in me. I reached out to Ken who, despite being in the process of undergoing radiation therapy at the time, graciously agreed to accept the commission. Flash forward six-plus months later, and my original, hand-drawn caricature collage of Jamie Lee Curtis arrived yesterday. Featured are her characters from Trading Places, Blue Steel, Freaky Friday, True Lies, Knives Out, Scream Queens, and Halloween II—all surrounding a lovely portrait of her taken at last year’s Venice Film Festival. There will also be a colorized print version on its way to me shortly. To say that I’m beyond thrilled with it would be an understatement.
Once properly framed, this exquisite and one-of-a-kind piece of art will hang proudly somewhere where I’ll see it every day and think of my beloved Dad and our “buddy days” at the movies all those years ago.
Speechless with gratitude. Thank you, Ken.
Vince Liaguno at 8:42 AM
Share